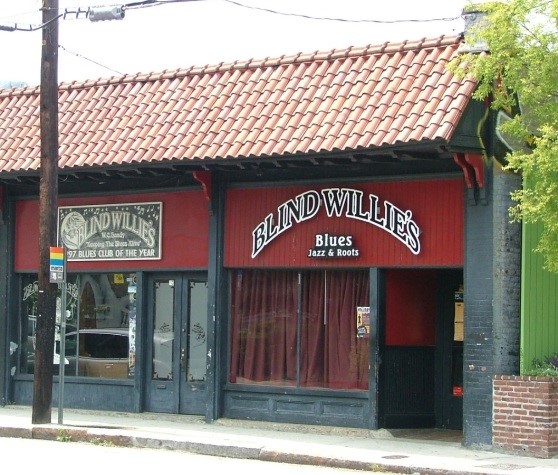 omments:  Named after Atlanta’s most renowned blues star, “Blind Willie” McTell, Blind Willie’s looks and feels like everything a blues club should be.  The building dates back to the 1920s or 1930s, and the club is a cozy rectangular room with high ceilings and low lights.  The bricks and floor are original.  Most of the seating is snug up against the stage, with a few tables located across from the sit-down bar in the rear of the room; all seats give an unobstructed view of the performers.  Eric King and his partner, Roger Gregory, founded the club in 1986.  King had long hosted his own blues show on WRFG-FM (89.3) radio, and he knew what Atlantans wanted.  Although Blind Willie’s started out on a shoestring budget, it had a good nucleus of local blues artists who were starving for exposure, and the club has since become the city’s foremost venue for launching the careers of its native talents.  Some of the most popular acts that have been featured here include Luther “Houserocker” Johnson (regularly appearing with the Shadows, the club’s house band), Sandra Hall, and Lotsa Poppa.  Poppa often toured with legendary R&B crooners Jerry Butler, Sam Cooke, and Jackie Wilson during the 1960s and was a regular feature at Atlanta’s famed Royal Peacock Club.  The partners also brought in national touring acts, mostly friends they had met at events such as the annual New Orleans Jazz & Heritage Blues Festival.  Atlantans have really taken to this establishment, and rightfully so.  It’s a place where you can hear the New Orleans-flavored blues of the Roulettes on one evening, the Texas-style blues of Johnny Copeland on another and the Delta influences of the legendary Dave “Honeyboy” Edwards on yet another.  Blind Willie’s also provides a menu that is sure to please. Try their New Orleans style jambalaya, Memphis-influenced BBQ pork sandwich or Chicago dog, described as “a classic Vienna Jumbo Dog served with mustard onion, tomato, relish, pickle, sport peppers and celery salt.” King, who considers himself a blues buff almost from birth, and blues sideman Gregory have long nurtured a love affair with this American art form, and as a result, they have given the city of Atlanta a great treasure, a venue where you can hear outstanding local, regional and national blues artists. 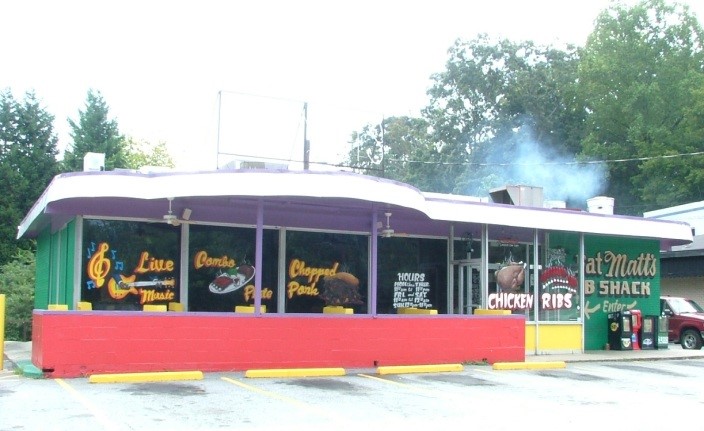 omments:  Fat Matt’s is both a rib house and a blues joint.  It’s more like a trendy suburban café than like the down-home places you’d find along the Mississippi Delta, but the atmosphere is still laid-back.  Some patrons enter and head straight for the counter on the right, where you can see the barbecue fire going and the meat being prepared.  Others grab one of the 45 or so seats inside, all scattered about tables that place the stage in easy view.  Or they opt for one of the booths on the adjoining patio that also provide good vantage points for hearing and seeing the band.  Life-long blues lover Matt Harper opened Fat Matt’s in September 1990, and after a lean first six months, the business really took off.  The long lines on most weekends attest to a formula that works:  good local blues and good barbecue.

You’ll hear Little Brother on Sunday, the Lee Griffin Band on Monday, Rough Draft on Tuesday, open mike night on Wednesday, Chicken Shack featuring Felix Reyes on Thursday, and a revolving selection of hot local bands on Friday and Saturday.  Jimmy Rodgers, Jr. sat in on one of their open mike nights.  Buster Poindexter and Emilio Estevez stopped by when they were filming the movie Free Jack.  So did former football star Dick Butkus for a “record amount of ribs” during the 1994 Super Bowl.  The ribs are among the tenderest you’ll find anywhere and the barbecue chicken first-rate.  Don’t mind if you see a line when you drive up – it moves quickly.  Besides, you’re bound to agree that a generous portion of succulent ribs and hot blues make the wait well worthwhile. 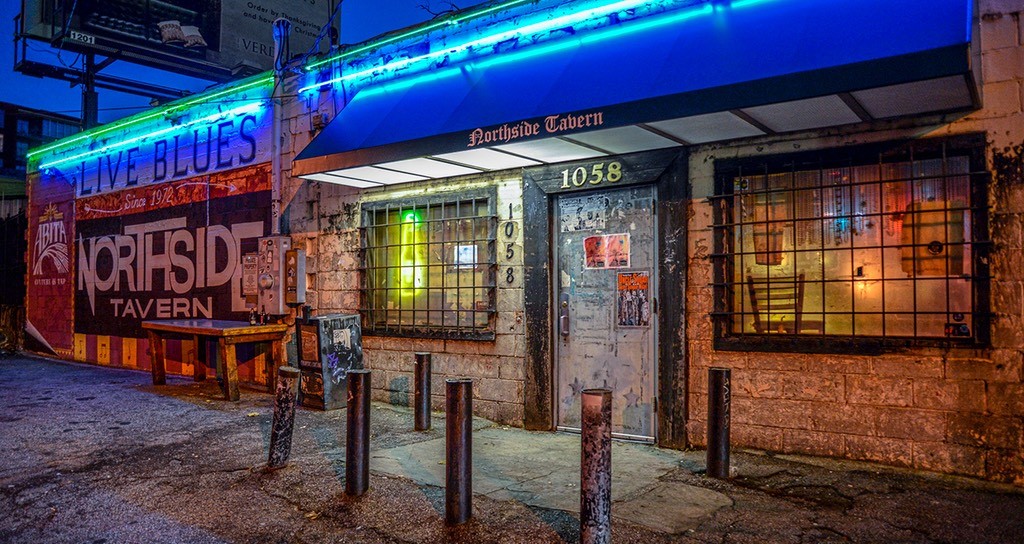 omments:  The Northside Tavern occupies a building that was constructed the 1940s. It opened as a grocery store then became a package store and ultimately a bar. It was purchased by the late Butler Webb, who operated the bar from 1969 until his passing in 1989. His daughter, Ella Webb, has been the sole proprietor since her father’s death. Local musician Danny “Mudcat” Deudeck approached Ella with a concept for a blues venue in 1992 and the club has quickly evolved, becoming a force on the Atlanta blues scene. It is considered by many as one of Atlanta’s best “blues juke joints.”  A stellar lineup of local, regional and national acts has performed here. Among their most notable were Jamaica-born and Dothan, AL-raised Eddie Kirkland, a legendary guitarist, harp player and singer who spent over a decade playing with John Lee Hooker; the late guitarist/vocalist Cora Mae Bryant, a third-generation Georgia Blues pioneer in the tradition of her grandmother, Savanna “Dip” Weaver and her father, Curley James Weaver; Macon, GA native Robert Lee Coleman; Nashville, TN-based Uncle Sugar; and Atlanta-based Beverly “Guitar” Watson, a septuagenarian who still is bringing it strong.  Northside Tavern is a true blues joint that ranks high on the list of must-visits when you are in Atlanta and craving for some down-home blues.

omment: Busy Bee was founded in 1947. Needless to say, it is a landmark eatery with tons of tradition. I recall eating great meals here during the late 1960s while studying at nearby Morehouse College. It was a cozy stop where you could get down-home cooking and be reminded of meals cooked by mom. It remains a favorite stop for students, local residents and visitors from across the country. The exterior of the restaurant is very modest. Once inside, you’ll find a cozy ambiance that invites sit down dining or carryout. Menu items include soul food staples such as chittlins, giblets, ham hocks, neck bones and fried or smothered chicken. Veggies range from broccoli cheese casserole to baby lima beans. You also will want to try desserts such as their very popular banana pudding or red velvet cake. The restaurant is located adjacent the historic Pasqual’s Hotel & Restaurant which now is owned by Clark-Atlanta University. Stop by Busy Bee and experience history while enjoying delicious soul food.

Their venture is bold and exciting. The reclamation of a historic concept is an enormous gift to the city and the citizens of Atlanta. The contributions of the Paschal brothers and Herman Russell to the history and growth of Atlanta are well documented. The forerunner of the new Paschal’s Restaurant, Paschal’s Hotel and Restaurant, was a landmark institution, reserving a special place in the history of Civil Rights movement. The current restaurant manager, Marshall Slack, served as a manager for the original Paschal’s for over 30 years. He witnessed firsthand the power breakfasts where the Rev. Dr. Martin Luther, Jr. and his associates Rev. Andrew Young, Rev. Joseph Lowery, Rev. Ralph David Abernathy and others chartered the course of the nation’s Civil Rights movement. Students from the colleges of Clark, Morehouse, and Morris Brown and Atlanta University would use the hotel as a headquarters when they returned from protest marches and sit-ins, sharing their stories of arrest and intimidation with parents in the restaurant and hotel lobby. Slack also helped the Paschal brothers book and plan logistics for legendary entertainers who played the hotel’s La Carousel Club; the likes of Ramsey Lewis, Cannonball Adderly, Lou Rawls, Aretha Franklin and the Modern Jazz Quartet, to name a few. After taking a hiatus from the hospitality industry following the sale of Paschal’s Hotel and Restaurant to Clark-Atlanta University in1996, Marshall Slack was persuaded to return for the opening of the new Paschal’s Restaurant by James Paschal. Mr. Paschal’s rationale? “We need you—besides, you still owe me money.”  With that, the soft-spoken Slack laughed and was reunited with his friend, James Paschal. He has brought old-fashioned management skills to a new generation of staff, from the kitchen to the dining room to the hosts and hostesses who greet guests upon arriving. 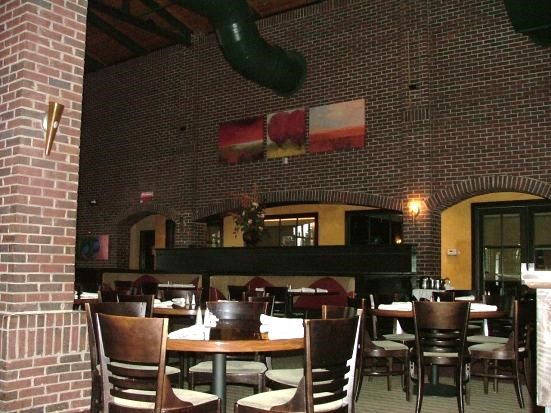 The restaurant’s menu is highlighted by the fried chicken recipe that has endeared the restaurant to patrons from across America for more than half a century. My order was as delicious as my first meal at Paschal’s while a student at Morehouse in 1968. You can order fried or roasted chicken by halves or quarters. Home-style pot roast, blackened catfish, Castleberry Hill shrimp and grits, braised short ribs, assorted steaks, and pastas round out the menu choices. As an exclamation point, try their soulful vegetable sides such as collard greens, fried okra, steamed broccoli or candied yams. Be sure to save room for one of their irresistible desserts: peach cobbler, bourbon pecan pie, or New Orleans-style bread pudding with rum sauce. The new Paschal’s Restaurant should be highlighted on your itinerary when visiting Atlanta. It is located near the Atlanta University Center, just a 10 minute walk to the Georgia Dome.

omments:  The Beautiful Restaurant is one of Atlanta’s finest for soul food and Southern cuisine.  The Perfect Church, a Holiness congregation, opened their initial restaurant in 1979.  They have owned five restaurants over the years, but have settled on one, their original Beautiful Restaurant at the Cascade location in southwest Atlanta.  The church started their first eating establishment because they wanted a place where congregation members could get fresh vegetables cooked in all natural oils, without pork.  It was an immediate success.  The Beautiful Restaurants are perfect examples of economic empowerment, and their delicious meals are a fantastic value.  Many Atlanta natives come here for the restaurants’ vegetable platter (three veggies, cornbread, and a beverage for $3.19!), but I couldn’t resist the baked Cornish hen, rice pilaf, and collard greens.  I had my entree at the Auburn Avenue restaurant and saved room for dessert at the Cascade location.  There Mrs. Lenora Reese, general manager, surprised me with three different desserts:  peach cobbler, apple cobbler, and banana pudding.  They were all delicious beyond words.  Other items you’ll find on the menu include braised short ribs, T-bone steaks, chicken flavored rice, squash and green beans.  The ambiance of the restaurant is enhanced by numerous potted plants and a meticulously landscaped lawn. A display case houses fresh homemade apple and carrot juice along with garden salads.  The décor is alive with hues of gold, orange, and white.   The Beautiful Restaurant is a great choice when considering your dining options in Atlanta.

Shoot Me An Email

Your message was successfully sent. Thank You!